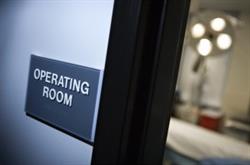 A woman’s Baltimore medical malpractice suit filed earlier this month alleges that a surgeon at the defendant hospital performed an unnecessary surgery on her, and that the surgeon failed to remove a piece of plastic in her abdomen. She further alleges that the plastic is causing her chronic abdominal pain and she will require additional surgery to locate and remove it. Learn more about the lawsuit below.

The woman had surgery in November of 2014 to remove a benign dermoid cyst. The surgery involved the use of a surgical robot to retrieve and remove the cyst, which would then be transferred to an EndoCatch plastic bag.

The woman also alleges that the surgery was unnecessary, and that "the defendant surgeon allegedly advised the woman that she needed the invasive surgical procedure to remove the benign dermoid mass for the purpose of generating medical bills for unnecessary medical care and treatment." She is alleged intentional misrepresentation and constructive fraud. "The plaintiff seeks punitive damages in the amount of $5 million and unspecified compensatory damages as a result."