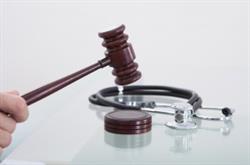 In a decision made publicly available last year, the Maryland Court of Special Appeals announced the reversal of a decision in the case of Fusco V. Shannon, allowing the plaintiff to have a retrial after a jury found in favor of the defendant. The Appellate court ruled that the lower court applied the wrong standards for expert testimony, excluding testimony that may have affected the trial's verdict.

The Plaintiff's husband was diagnosed with prostate cancer in 2003 and was prescribed a drug called Amifostine to mitigate the effects of radiation therapy. After receiving 25 injections the man developed a rash, possibly as a result of Amifostine, which eventually left him hospitalized with Toxic Epidermal Necrolysis Syndrome, of which he died three months later. The plaintiff filed a medical malpractice and wrongful death suit against her husband's doctor, alleging that the physician failed to obtain informed consent when prescribing Amifostine. As part of her case, the plaintiff submitted testimony from a pharmacist on the risks of the drug, which the court excluded from trial based on the defendant's assertion that the pharmacist was not a medical doctor and therefore not qualified to be considered an expert witness.

The Maryland Court of Special Appeals ruled that the case could be retried, stating that the standard for expert testimony regarding an informed consent claim is different than the standard for a medical malpractice claim. The court stated that the testimony of the pharmacist, regarding the risks of the drug on a patient with the husband's condition, was entirely within the pharmacist's area of expertise. The case will return to a lower court for a retrial.