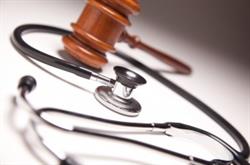 An example of this circumstance can be found in a recent suit which was filed in Michigan by a family against a deceased radiologist. In 2009, the radiologist’s medical negligence had been responsible for the death of the family’s 3-day-old baby. While the baby was born prematurely, she was considered healthy. She was being fed through an umbilical venous catheter, which was inserted improperly one morning during her feeding. Though the radiologist saw the x-ray that showed the catheter was in the baby’s heart, he reported no abnormalities. Fluid built up around the baby’s heart, causing her to go into cardiac arrest and die.

The radiologist himself died four months before the family filed a medical malpractice suit. They successfully sued his estate for $1.25 million. "The court decided his failure to tell anyone about the improper placement was negligent and thus a contributing factor in the baby’s death."