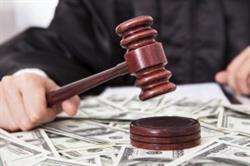 Johns Hopkins Hospital in Baltimore is settling big in a case brought against one of its former employees, Dr. Nikita Levy. The hospital has agreed to a preliminary settlement of $190 million to more than 8,000 women and girls who were treated by the Hopkins gynecologist, who secretly took pictures of them with a pen camera during examinations.

Levy worked for Hopkins for 25 years before he was discovered by a female co-worker, who alerted hospital authorities of her suspicions that the pen he wore around his neck was actually a camera. Levy was escorted off the premises and Baltimore police were alerted. He committed suicide several days later.

A federal investigation revealed that Levy had accumulated 1,200 videos and 140 images of patients during examinations over his time at Hopkins. He saw 12,500 patients during his career. 62 girls were victims of Levy’s actions, as "Levy violated hospital protocol by sending chaperones out of the exam room," according to the AP. The images and videos will be destroyed by court order. From USA Today:

Attorneys said about 8,500 women have signed on to the class-action lawsuit. They will be given a chance to testify before the judge about the settlement on Sept. 19. If the judge approves the settlement, each woman will be interviewed by a forensic psychologist to determine her compensation. Any woman who was examined privately by Levy is eligible to enroll in the class action; no other evidence is necessary.